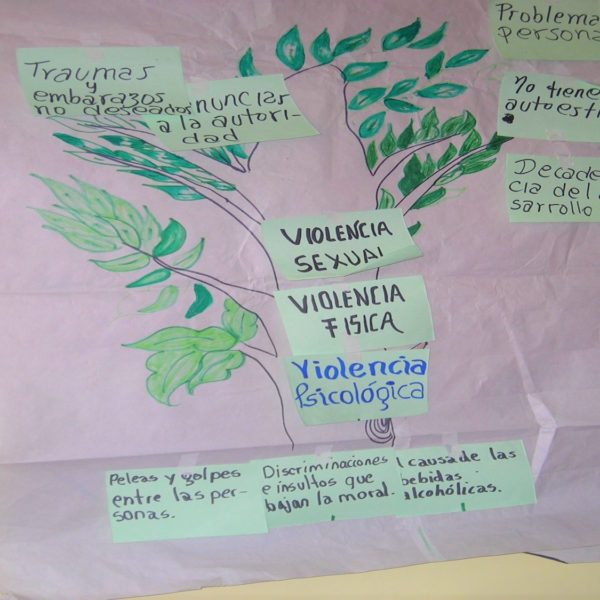 During the 16 Days of Activism against Gender-Based Violence campaign, held annually from November 25th to December 10th, people around the globe discuss how to stop violence against women and girls. GBV also affects men and boys, regardless of their gender identity and sexual orientation. GBV is a perverse abuse of power that is physically and psychologically damaging and limits its victims’/survivors’ rights, opportunities, and agency.

Almost 12 years ago, Cultural Practice, LLC (CP) partnered with the USAID-funded Health Policy Initiative’s Gender Team at Futures Group International to co-develop Avances de Paz (ADP), a participatory process to make gender-based violence public and visible, investigate its root causes, and design and advocate for a political response from local government. [1] The methodology was developed to respond to the high prevalence of GBV in Bolivia, where it is estimated that 40% of women over 15 have experienced violence in their lifetimes.

The ADP methodology is designed to support communities affected by GBV to take action against the imbalance of power between men and women, not only in Bolivia but around the world. Organizations can also adapt the methodology to facilitate community-led engagement with other gender issues. The process creates space for the personal stories and collective experiences of community members and provides a conduit to transform those experiences into action against GBV in their municipalities.

The ADP process begins as a series of conversations facilitated through participatory data collection and analysis tools. These are designed to illuminate gender inequalities, the historical impact of violence on individuals and communities, and the relationship between gender inequalities and the use of violence to maintain inequalities. Exercises include creating historical timelines to identify violent episodes in the community’s history and community maps of violence to locate places, including within homes, schools, and places of worship, where women, girls, boys, and men feel unsafe and vulnerable to violence.

Additionally, participants document and reflect on the division of labor between men and women, and how women’s and men’s differential access to opportunities and assets affect their vulnerability to discrimination and violence. Through the reflective ADP, perpetrators of GBV are engaged in a transformative process of building empathy by linking the experiences of their victims to their own experiences of violence exercised by other social and political actors. Through these activities, participants pinpoint the root of GBV– the extreme abuse of power to reinforce and exploit gender inequalities.

Facilitators of these workshops synthesize the information gathered and bring it back to the communities to analyze and identify problems collectively. It contrasts with similar participatory approaches as it is less extractive, allowing the participants to determine the meaning and import of the findings rather than leave the role of analysis to outside researchers. Through the local collection and analysis of information about gender inequalities and violence, community members assume ownership of the information and its importance in their lives.

The participants use their own interpretations of the data to inform the design of concrete actions to reduce the occurrence of GBV and to better respond to the needs of those affected by it. The ADP process culminates in communities developing and advocating for a political response through the uptake and funding of their proposals in the annual municipal plans and budgets.

During the ADP pilot in Bolivia, communities in one rural municipality were successful in obtaining municipal funds for a lawyer to document the many complex laws around GBV and to inform the municipality about their legal and social obligations to victims/survivors. In another rural municipality, the communities decided to create a network of governmental and civic organizations to coordinate their efforts to prevent and address GBV, while an urban municipality increased their funding for a similar network as a result of ADP communities’ advocacy. In the second urban municipality, the youth groups involved in ADP advocated for and won a commitment of five years of funding from the local government for annual arts competitions on the theme of GBV prevention.

The methodology took advantage of Bolivia’s participatory planning process that engages municipal stakeholders in the development of their annual operational plan and budget. The rationale behind the methodology was that local resources exist to address the issue, but local government lacked the awareness, information, and knowledge to develop effective interventions.

ADP gave municipal residents the tools to research, analyze, and act on information through the development of actions and advocacy. Participants in ADP develop skills to advocate for funding for their initiatives through capacity building workshops. The ADP methodology brings people along in a process of understanding gender-based violence in their communities, putting control of the analysis and response in their hands. At CP, we are committed to using innovative methods like these to strengthen and build local people’s capacity.

CP worked with six member-organizations of the PROCOSI NGO network in four municipalities to pilot the methods, which were then replicated widely throughout the country by many more member-organizations in the 32-member network. Since then, ADP has been adapted for use in schools and labor unions.

ADP is now a well-tested methodology that can be implemented in neighborhoods, communities, and municipalities responding to GBV. Its tools can also be applied to gender issues more broadly for gender assessments and gender-integrated evaluations, especially in the context of political decentralization, participatory local government planning, and decision-making.

ADP is especially applicable for those who work in the Latin American and Caribbean region as the three implementation guides are in Spanish. CP would like to make the manuals more widely known and used throughout the region. As the manuals are currently only available in Spanish, CP would also be happy to work with interested organizations to translate the manuals into other languages for broader application.

Innovative, tested methodologies like ADP are important pieces of the conversation to end gender-based violence and work towards a world that is safe for everyone.

Gender-Based Violence and Family Planning Services in Bolivia: A Review of the Evidence through the Lens of the Demographic Health Survey and the Health Policy Initiative Avances de Paz Project

[1] CP developed Avances de Paz Initiative in conjunction with USAID Bureau of Global Health and the USAID Mission in Bolivia under its subcontract to the Futures Group under the Health Policy Initiative Project.