5 paths to SDG 5: breaking down barriers to women’s empowerment 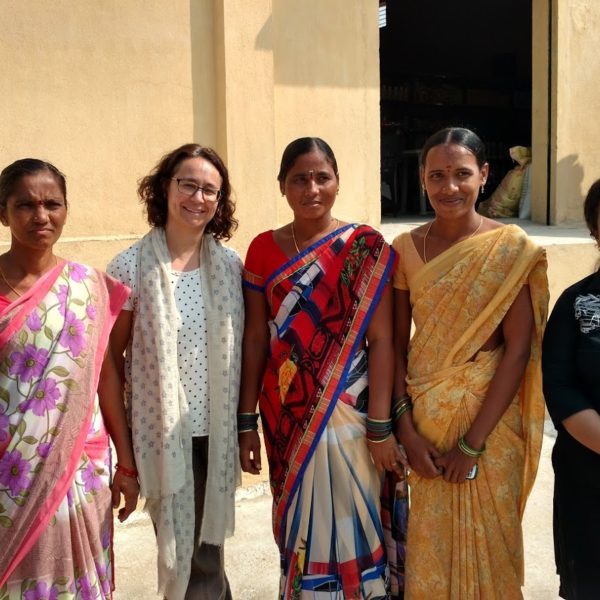 Today is the 2018 International Women’s Day. Its theme, from the United Nations, is Time is NOW: Rural and urban activists transforming women’s lives. On this day we acknowledge and support activists and their work, and re-energize efforts to reach the United Nation’s Sustainable Development Goal (SDG) Number 5: “To achieve gender equality and empower all women and girls” in our lifetimes.

This International Women’s Day we reflect on our work related to five key SDG 5 targets.

At Cultural Practice, LLC (CP), we support the transformation of women’s lives by analyzing gender-based constraints within the context of culture, society, and gender relations. Each of these five target areas is one that presents both urgent challenges for women and promising initiatives for a better way forward.

SDG 5 Target 5.2: Eliminate all forms of violence against all women and girls

Gender-based violence (GBV), according to Bloom (2008), is violence resulting from “the normative role expectations associated with each gender, along with the unequal power relationships between [men and women and people in other gender categories] within the context of a specific society.” The definition encompasses violence against men and boys, although studies reveal that women and girls are overwhelmingly more affected.

The United Nations reports that globally an estimated 35% of women have experienced physical or sexual violence from a partner or non-partner; some national studies show higher results (up to 70%). Other forms of violence include female genital cutting affecting at least 200 million women and girls, and human trafficking, of which 71% of victims are women and girls.

A holistic response to GBV requires a multilevel and multisectoral approach â€“ the sort of approach recommended in the joint strategy on GBV for Eastern, Central, and Southern Africa that CP co-wrote for USAID and UNICEF. The strategy advises that programming address GBV on multiple fronts, including through developing and enforcing protective legislation and policy, improving systems to monitor and respond to GBV in the areas of health, education, social welfare, security, and justice, and creating high quality services for GBV survivors. Reducing GBV requires a long-term, broad-based approach.

Working with men and boys to change attitudes and behaviors is another key recommendation from the joint strategy; inclusivity of all community members is a consideration in all our work. More than a decade ago, CP partnered with the USAID-funded Health Policy Initiative’s Gender Team at Futures Group International to develop Avances de Paz, a participatory process for the entire community to make gender-based violence public and visible, investigate its root causes, and design and advocate for a political response from local government. Processes that engage men and boys are necessary for a sustainable reduction of GBV. 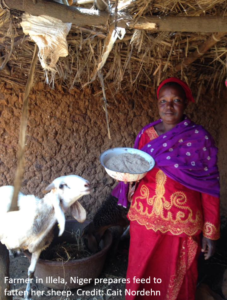 SDG 5 Target 5.4: Recognize and value unpaid care and domestic work through the provision of public services, infrastructure and social protection policies and the promotion of shared responsibility within the household and the family as nationally appropriate

SDG 5 Target 5.A: Undertake reforms to give women equal rights to economic resources, as well as access to ownership and control over land and other forms of property, financial services, inheritance and natural resources, in accordance with national laws

In 2011, the FAO estimated that women comprise 43% of the agricultural labor force; supporting women farmers isn’t only an intrinsic good, but is also vital to raising agricultural productivity. Yet, many women who provide unpaid labor in agriculture typically do not have equal access to the needed resources, including technologies such as improved seeds, fertilizer, and tools for raising their productivity.

Gathering solid data is important to tackling gender-based constraints. The Women’s Empowerment in Agriculture Index (WEAI) measures the dimensions and extent of women’s empowerment, inclusion, and agency in agriculture, as a step towards addressing obstacles women face in the agriculture sector. The WEAI was launched in March 2012 and developed by the International Food Policy Research Institute (IFPRI), the Oxford Poverty and Human Development Initiative, and USAID. Cultural Practice works with IFPRI to use qualitative methods to explore different iterations of the WEAI: a project-level (Pro-WEAI) under the Gender, Agriculture, and Assets Project’s second phase (GAAP2) and WEAI for Value Chains (WEAI4VC). The Bill and Melinda Gates Foundation, the Millennium Challenge Corporation, and USAID have funded different portions of these activities.

Gender inequality impacts the nutritional outcomes of women and children, especially in developing nations where many contend with nutrition deficiencies. Women may not have the knowledge to make decisions that could improve the nutritional content of their meals. And even if they do, they may not have the income or the power to act. The technology assessment toolkit as well as the GAAP2 research explores how gender roles directly affect the availability of nutritious foods in the household.

SDG 5 Target 5.A: Undertake reforms to give women equal rights to economic resources 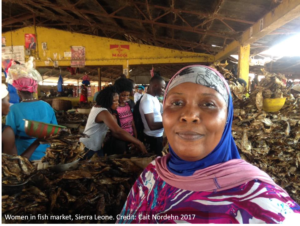 Women’s economic empowerment is a trending topic â€“ there has been a flurry of articles critiquing the current methods in international development. A New York Times article criticized Western development professional for “depoliticizing” women’s empowerment, focusing on giving chickens instead of confronting complex barriers to equality and therefore failing to effectively support women. Women around the world often work in lower-paid, insecure jobs due to discrimination. Economic empowerment initiatives aim to give women a way out of poverty, but can that be simplified to skills training or livestock?

A new direction looks at women’s economic empowerment specifically through agribusiness, with a focus on rural women. CP co-authored a paper as part of a UN Foundation review of available data on rural women entrepreneurs. The paper found gaps in attention to both women’s choices in entrepreneurship and men’s support or inhibition of women’s entrepreneurial efforts. A holistic approach to women’s economic empowerment must include gathering information on the local context, such as gender relations and available economic choices.

CP also contributed to the development of the Women in Cross-Border Agricultural Trade policy brief which finds that expanding women’s opportunities to engage in formal cross-border trading can drive economic growth and food security. Focusing on agribusiness can meet women where they are, as many women are involved in informal or unpaid agribusiness and agricultural activities.

Worldwide, maternal mortality rates have been dropping since 1990 but an estimated 830 women still die in childbirth every day, according to WHO data from 2015. Even with almost 3 decades of progress, a May 2017 report from NPR and ProPublica found that the US has the worst maternal mortality rates in the developed world. Other studies have come to the same conclusion, with maternal deaths rising in the US as they fall in other countries, and especially high rates among non-Hispanic black women. More needs to be done to tackle these high maternal mortality rates.

One key step is to gather data on best practices for maternal health care. Cultural Practice conducted a Study of the Most Significant Changes Contributing to Decreased Maternal Mortality in Select Ministry of Health Hospitals in the Dominican Republic and found that changes in healthcare providers attitudes toward women and their newborns resulted in improved clinical practices that saved women’s and babies’ lives. 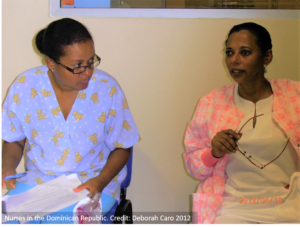 The change in attitude came about through a focus on a teamwork and accountability shared by all key actors and essential services in the hospitals that put mothers and their babies at the center of care.

In the US, medical practitioners and researchers in California addressed the rising maternal death rates by building a consortium, California Maternal Quality Care Collaborative (CMQCC), to dig into the causes of death in pregnancy, using their findings to suggest new procedures outlined in free toolkits. Since the organization’s founding, the state’s maternal mortality rate dropped by 55%. While initiatives like CMQCC offer hope, for black mothers in the USA who are at the most risk research has thus far found little to offer in the way of protection. Resources and attention must be focused on further research to address this pressing issue.

Target 5.B: Enhance the use of enabling technology, in particular information and communications technology, to promote the empowerment of women

The gender gap in the use of digital technology is well-documented. Women are less likely to use the internet than men, with the gap as high as 43% in sub-Saharan Africa according to data from 2013. They are also 14% less likely to own a mobile phone compared to men.

A significant barrier to women’s digital technology use is cultural norms. CP Senior Associate Cristina Manfre, in an interview by Devex, points out that technology initiatives that don’t keep cultural context in mind can accidentally reinforce harmful gender norms around access to technology. Both overall access to and training on digital technology and social norms must be addressed to close the digital gap. The former could be helped if women have the ability to find more info about how they can get online, whilst the latter will take more time to adjust.

Closing the digital gap can allow women access to information, financial services, and networks. Mobile phones can provide women with these opportunities, as well as specific services such as phone-based agricultural extension services that overcome the time and mobility constraints to bring advice to women farmers. M-Pesa is another example of how mobile phone access improves women’s lives: the money transfer service allows women to easily access funds and is credited as a cause for significantly reducing the mobile gender gap.

The use of other digital tools also supports women breaking into professional roles. A woman Field Officer with the One Acre Fund found that using tablets in her job made her feel more professional and that she could “approach a farmer with confidence and with the knowledge that [she] will get the attention [she] deserves” (OAF n.d.). 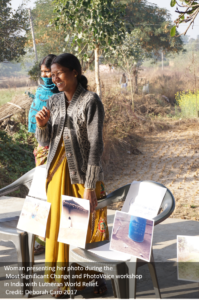 These five issue areas under SDG 5 do not encompass every struggle women face nor every challenge on the path to reach gender equality, but they are all key to achieving the goal of empowerment for women and girls. Without confronting them, women cannot reach equality. As a field, international development is in a moment of opportunity â€“ we can apply the momentum of movements such as #MeToo along with calls for gathering and sharing data and a growing receptiveness to institutional transformation to do better and be better.