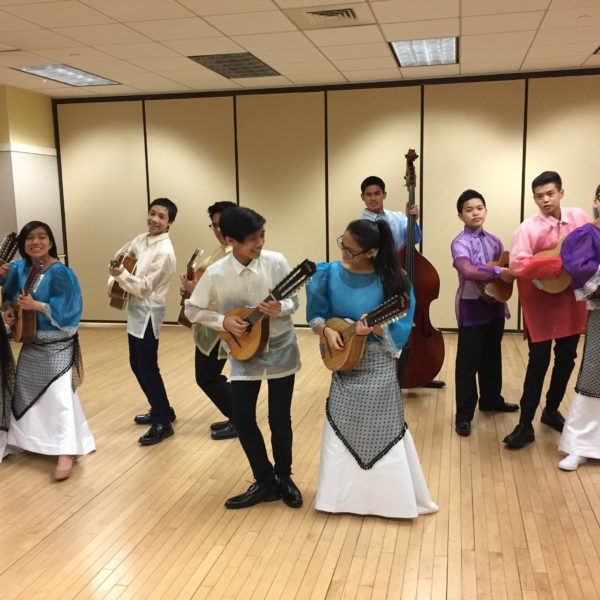 Very recently, I told my colleagues in my day job that I couldn’t work on a proposal over the weekend because I would be rehearsing and performing with the Iskwelahang Pilipino Rondalla.

In my day job, I am a senior research fellow at the International Food Policy Research Institute in Washington DC.  I am an economist; I conduct research on gender and food policy in developing countries, and work with large teams of researchers of different disciplines.  Some of my team members are quantitative social scientists (mostly economists), some are nutritionists, some are qualitative social scientists (sociologists and anthropologists), and others use both qualitative and quantitative methods.

In contrast, I have been with the rondalla for only five years.  I play the bandurria—a 14-string traditional Filipino instrument that is similar to the mandolin. It is one of five instruments that comprise the rondalla, a musical ensemble of string instruments—the bandurria, the octavina, the laud, the guitar, and the bass. The bandurria section is usually split into B1 and B2, which adds a dimension of harmony to the ensemble. The octavina, which looks like a small guitar, has 14 strings similar to the bandurria, but is tuned an octave lower; its sound has been compared to the cello. The Iskwelahang Pilipino Rondalla does not have a laud player, but is joined by the bass in its rhythm section.

Each instrument has its own part, and each is important.  Music for the rondalla is arranged for the four parts—each part contributes to the whole, and sometimes the melody is played by one section.  Similarly, in mixed methods research, both quantitative and qualitative research have their own contributions, and both are important.  In impact evaluations, the quantitative research tells us the direction and magnitude of the impact of the program, but the qualitative research allows us to know why it had that impact—or why the program didn’t work as well as intended.

Each instrument section has to perform well—and this means lots of practice.  Similar to an orchestra, each performer has to master his or her instrument.  This means hours of practice, resulting in calloused and sometimes bloody fingertips (I no longer have fingerprints on my left index finger), and cramped arms from holding the instrument.   In good mixed methods research, the economists, anthropologists, sociologists, and nutritionists all need to be well-trained in their disciplines and research methods.  Quantitative work needs to be grounded in good training in statistical methods; economists have to be trained in the relevant theory, econometric, and impact evaluation methods. Good qualitative work is the product of many years of training, and many hours spent developing protocols, training field researchers, conducting interviews, and finally, analyzing the qualitative data.

Individual practice is crucial, but so is practicing with the ensemble.  One practices solo, but the rondalla’s music begins to gel with consistent ensemble practice.  Our practice sessions typically have chairs arranged in a circle (thus the name, rondalla), instrument sections sitting together, except for the bassist, who stands. Similarly, mixed methods teams improve by working together over the years.  I have worked with a team of qualitative and quantitative researchers for years—even decades for some. The team that is working on the Gender, Agriculture, and Assets Project, Phase 2, has been together since 2010, albeit with some departures and additions.

Innovation and growth make things fun.  Finally, what’s the point of making music if you’re not having fun?  The IP Rondalla is unique among rondallas all over the world in that the musicians also dance.  We play both traditional Filipino music and contemporary songs.  We have new members of the rondalla as students climb the ranks; older members of the rondalla graduate and come back as teachers.  Similarly, what’s the point of doing research if you’re not (also) having fun?  True, my team is working together to develop metrics for gender equality and women’s empowerment, but we also have lots of fun.  We have more seasoned members welcoming young and energetic members.  Our latest co-principal investigator is 15 years younger than I am, tech-savvy, and full of energy!

So, dear colleagues in my day job, when I say that I can’t work on the proposal this weekend because I’m at rondalla practice, preparing for our summer tour—be assured that I will return to the proposal on Monday, energized and inspired.  Being a member of the IP rondalla is making me a better team player and social scientist.

Agnes Quisumbing is a senior research fellow at the International Food Policy Research Institute, where she does research on gender, poverty, women’s empowerment, and economic mobility. Agnes has been at IFPRI for more than twenty years, but has been playing the piano for more than twice as long. She is a newcomer to the bandurria, which she has studied for five years.