The Father-Daughter Factor in Women’s Empowerment Part 1: Reflecting on Research 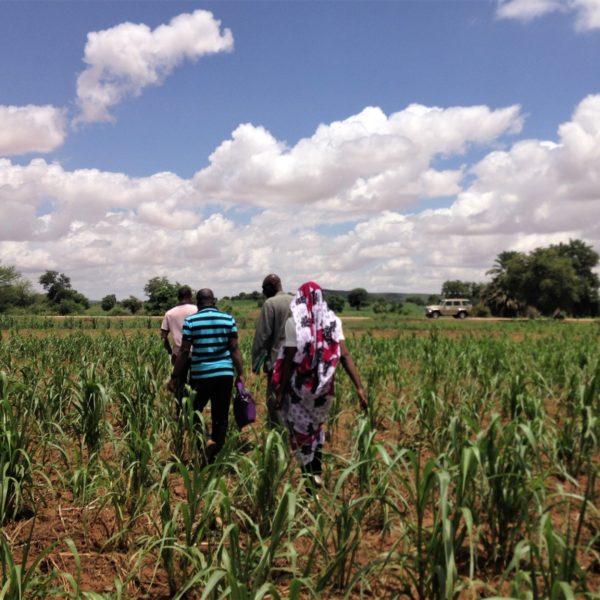 The interviewee took off her sandals and threw a tapestry to the ground of a room the size of a cubicle. My translator effortlessly slipped her sandals off in front of the entryway. I, the interviewer, followed slightly more clumsily, shaking off wet sand wedged between my toes before planting them on the ground. We all sat on the tapestry in separate corners of the room; the rain acting as a door, dampening the sounds of the village.

The scene was set. We were gathered there that day to get through this thing called an interview. I had my script (the interview guide) in hand, which I had pretty much memorized after two weeks of data collection for a gender and value chain assessment in rural Niger. But with interviews, you never know for certain how the exchange will go. After all, we’re not just communicating from separate corners of the room, but through our perceptions of one another: of where we’re from, ethnicity, age, gender, and positions of power. My modest skirt, blouse, and scarf draped over my head (quite poorly) probably muted aspects of my identity as a white young(ish) American woman but could never transform me into a local. I leaned on my translator from the capital city Niamey to help me walk the walk and talk the talk – not just simply from French to Hausa.

Over a two-week period, the translator and I had interviewed so many women and men about their agricultural livelihoods producing wheat, millet, onions, cowpeas, and sheep. We were tired. This was our last interview. I asked our interviewee how she acquired her land. I knew from the translator’s face that the woman, who was widowed, had said something of significance.

“I inherited my land from my father. I do the work in the fields to grow wheat to honor my father who passed away,” the translator said (but in French).

This shook me a little. Very few of the women I’d interviewed in the Tsernaoua area had inherited land, let alone knew how to produce wheat. I found that nearly all tasks involved in producing, processing, and marketing wheat are done by men with the exception of winnowing. Social norms discourage women, even the few who manage some land, from interacting with men to gain technical knowledge on how to produce wheat. These men include extension agents, a position dominated by men, and men outside of their families. This woman, however, said she was able to get information on how to produce wheat from men in her community.

While she was able to produce wheat she was mocked, particularly by women, in her community for doing so. However, she said she could change women’s and men’s minds about women being able to produce wheat by going out to the fields and doing it. What struck me the most was the reason she gave for producing wheat, despite facing social consequences: to honor her father.

After completing the interview my translator and I got back in the car parked behind some cattle, looking at each other with the same expression on our faces: pensive with a splash of exhaustion. Our bodies popcorned down the village road back to the main dirt road. Returning to the project office in Konni where I’d been living with very few other people around, except the guards and the guy who sold me Coca-Cola, I had sufficient time to myself to reflect on the day.

In the confines of my room I took the scarf off my head, changed into my normal athleisure wear, and sat in a corner with my thoughts. I collapsed down on my bed and closed my eyes; much like film, I needed the dark to process a full picture of the day.

Opening my eyes, and getting out of bed, I changed my clothing back into more modest dress. I was escorted by the guards across the street to eat in an empty motel restaurant. I was still turning over in my mind what the woman had said about her father as I sat down at the restaurant. What were the factors that set this woman apart from others to challenge social norms? What role did her father play in this? What else contributed?

I also began to think about how I got to this particular seat at the Motel Konni restaurant and what got me there. What contributed to why I do the work I do? I began to see that some of the reason I was sitting in that chair had to do with my own father.

Like many kids in the U.S. in the 1990s, my parents divorced. Unlike most other kids, I lived with my dad and not my mom for a period of time. I’m certain it was challenging for my father to take on new responsibilities like laundry and dealing with the growing pains of a tween girl.  I saw him take on roles and responsibilities that most fathers at the time didn’t do. On a subconscious level, that made me question social expectations for myself as a young woman and what I could aspire to be. Maybe I too could do it all? He also taught me that my ideas mattered and helped me discover my love for talking to people from different backgrounds than my own. One way he did this was by inviting me to join conversations with the colleagues he volunteered with in Honduras after Hurricane Mitch or at the university where he worked.  He created an environment where I was made to feel my contributions to conversations were just as valid as anyone else’s, despite being younger, an adolescent girl, less educated, and without worldly experience. This factor, along with the all of the other support he and my mom provided me by keeping me safe, healthy, and supporting my education, made a difference.

All of this led me to aspire to a career that took me far outside of what I knew in my hometown of Duluth, Minnesota to places where I could have more conversations with people who weren’t just like me. This was definitely not the norm for people in my hometown. So, I eventually found myself at the Motel Konni restaurant seat eating and reflecting on weeks and weeks’ worth of interviews. In the interview with the woman who grew wheat I didn’t find out everything I wanted to about her. It’s impossible to get the full picture of a person through one interaction. But our conversation presented something I hadn’t thought much about before both in terms of my own life and the lives of other women in different corners of the world: the role fathers play to enable their daughters to aspire.

This blog is one of two on the role of fathers in women’s empowerment and gender equality. Watch this space for further writing and research on the topic.