An Enabling Environment to Support Women’s Profitable Participation in Agriculture: What Does It Look Like? 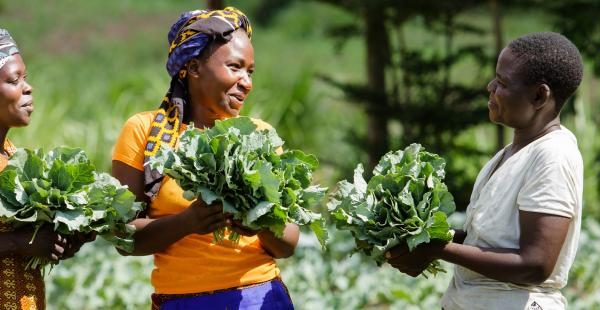 Women are critical to ensuring that Feed the Future investments support inclusive and sustainable agricultural market systems. To date, much of the attention given to women in agriculture has driven investments to them at the production end of the agricultural value chain. From the Women’s Empowerment in Agriculture Index to the World Bank’s Leveling the Field research on gendered productivity constraints, the development community is measuring and analyzing differences in women’s and men’s contributions and outputs as producers. This research illustrates the gaps in access to resources that limit women’s productivity, and how norms impede women’s full participation in and access to benefits from agriculture.

We also now know more about women beyond production. Women’s economic empowerment beyond production was the focus of LEO Report No. 38 (2016). There have also been several publications about women cross-border traders — for example, Women in Cross-Border Agricultural Trade (2012) and this report focusing on women in southern Africa. At the same time, a significant body of research about women entrepreneurs from other parts of the development community, like the UN Foundation and ExxonMobil’s Roadmap to Women’s Economic Empowerment, is growing. Yet, despite this wealth of information, there is a gap of information around the policy levers that create an enabling environment for women to enhance their participation in and profit from agriculture.

In part, this gap remains because women are often out of the reach of formal rules and regulations. As producers, many women manage land in someone else’s name or contribute their labor to the production of crops on other family members’ plots. As entrepreneurs, many operate informal microenterprises without employees or a regular place of business. They are traders who sell small quantities of goods on the side of the road or process crops into food items sold in markets. And while the enabling environment encompasses both formal and informal rules and regulations, policies that support agriculture often overlook responses that can address constraining norms associated with women’s household responsibilities, leadership, and access to benefits.

Women are out of reach not because they are not participating, but often because the formal data systems that drive policy decisions do not capture their work. When there is data, possibilities exist to identify policies that can positively impact women, as the World Bank’s Enabling the Business of Agriculture Index recognizes with its new topic indicator on gender. For example, the Rwandan government modified rules to increase agent banking as a response to data that only revealed that only 20 percent of commercial bank loan holders were women.[1]

The newly released Increasing Women’s Profitable Participation in Market Systems Technical Note from the Feed the Future Enabling Environment for Food Security project explores these issues and the range of policies that can support women’s profitable participation in agricultural market systems. Specifically, it asks the question: What kinds of national and institutional policies can support women’s participation, performance, and benefits as producers, agri-entrepreneurs, and wage workers in agriculture? The brief examines a range of policy options from property and land rights to infrastructure and non-discrimination policies, explaining how they impact women as producers, agri-entrepreneurs, and wage workers and identifying recommendations based on existing evidence for establishing a supportive enabling environment for women.

See the original post by Feed the Future Enabling Environment for Food Security project and Cultural Practice, LLC on AgriLinks.