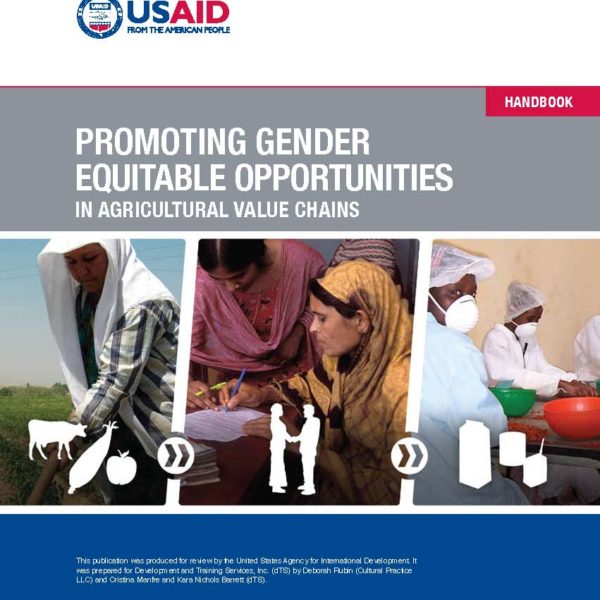 Gender issues fundamentally shape the totality of production, distribution, and consumption within an economy but have often been overlooked in value chain development. From production to processing to disposal, gendered patterns of behavior condition men’s and women’s jobs and tasks, the distribution of resources and benefits derived from incomegenerating activities in the chain, and the efficiency and competitiveness of value chains in the global market. Although most of the leading international donor agencies adopt value chain approaches as a strategy for enhancing economic growth and reducing poverty, until recently, few have considered how gender issues affect value chain development.

This is beginning to change. Women are now widely acknowledged to contribute to and shape the global economy as employees, entrepreneurs, and leaders. Moreover, a renewed focus on agriculture has been accompanied by a reminder of the high participation rates of women in domestically oriented and commercial food production and of the persistent gender inequalities that hinder progress. To address this gap, the GATE project developed a participatory training program to enhance practitioners’ understanding of how gender roles and relations impact value chains and program outcomes. During 2008-2009, the training program was piloted in Kenya and in Tanzania. This Handbook is an outgrowth of those experiences.

This Handbook includes The Gender Dimensions Framework (GDF) which is based on The Domains Framework for Gender Analysis developed by Deborah Rubin and Deborah Caro of Cultural Practice, LLC under USAID contracts (the WID IQC and the Health Policy Initiative).