Reducing the gender gap in agricultural extension and advisory services: How to find the best fit for men and women farmers 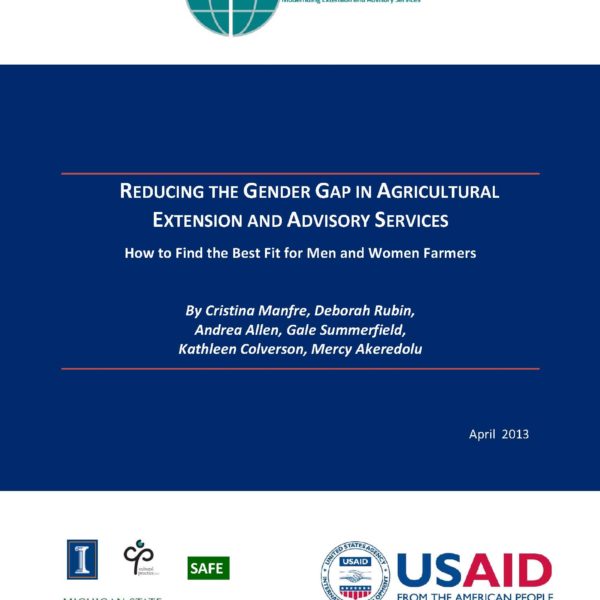 Once again at the center of global debates, agriculture is recognized as a fundamental driver of economic growth and poverty reduction for many developing countries and a priority area for investment. A characteristic of the revitalization of the agriculture sector has been the recognition that past efforts have failed in part because they overlooked women’s role in the sector and the role of gender inequalities in reducing agricultural productivity. According to the 2010-11 FAO report “The State of Food and Agriculture,”“Women comprise, on average, 43 percent of the agricultural labor force in developing countries, ranging from 20 percent in Latin America to 50 percent in Eastern Asia and Sub-Saharan Africa” (FAO, 2011:5). The report argues that reducing gender inequalities in access to productive resources and services could produce an increase in yields on women’s farms of between 20 percent and 30 percent, which could raise agricultural output in developing countries by 2.5 percent to 4 percent (FAO, 2011).

Realizing these gains requires men and women farmers to have access to the information, skills, and tools they need to improve their yields. This, in turn, requires reforming the institutions involved in the delivery of those services. A fundamental aspect of this process is recognizing that agriculture writ large, and specifically the processes of providing effective extension and advisory services (EAS), involve much more than technical solutions. A complex array of individual characteristics– including age, marital status, income, and educational attainment– as well as social categories such as ethnicity and gender influence the abilities of technicians to deliver the knowledge they have and the willingness and capacity of producers and processors to make use of the services offered. These factors also shape the influence that men and women farmers have on the content of EAS programs and the manner in which it is delivered. Furthermore, the structure and policies of institutions that contribute to and influence agricultural development are also shaped by the values, behaviors, gender relations, and social norms of societies in which they are situated. Maximizing the benefits from agricultural growth for smallholder farmers and the economy at large depends on understanding these influences and designing programs that take them into account.