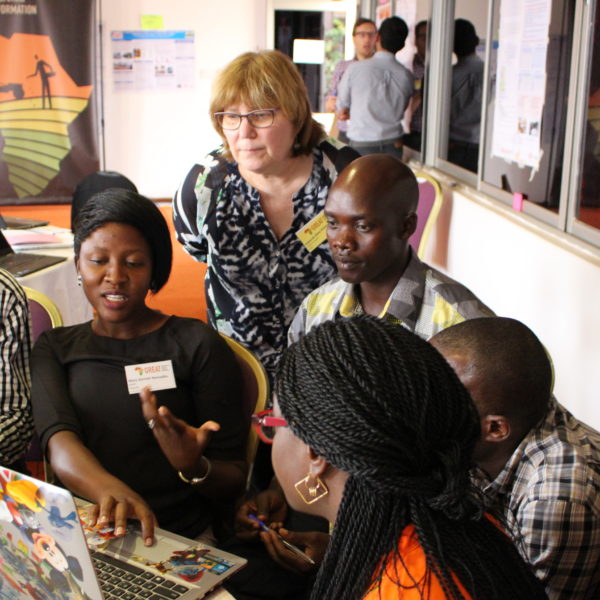 It was in May 2014 that I first got involved in what has become the Gender-Responsive Researchers Equipped for Agricultural Transformation program or GREAT. I’d been invited to a gathering of diverse supporters of gender integration into agricultural research including academics from Cornell and Makerere Universities and practitioners from the International Food Policy Research Institute, USAID, and more. For a few cool and misty days in May on Cornell University’s lovely campus in Ithaca we enthusiastically debated and discussed how to organize and present knowledge and skills of gender research to both encourage and equip agricultural researchers to do high quality gender-responsive work. We wanted prospective participants not simply to count the number of women they had interviewed, but to do much more to identify and achieve measurable outcomes in gender equality. By the end of the meeting, plans were in place to prepare a proposal and to shop it out for funding a new kind of training program for agricultural researchers.

Leaving Cornell, I had no idea I would soon become a core partner in creating a curriculum to engage agricultural researchers in gender-responsive research. The group had already agreed on an innovative approach to hold two sessions of face-to-face, in-class instruction several months apart and bookending a field research period in which participants would test out both qualitative and quantitative research methods in investigations of their own design, assisted by a mentor. In some ways it was similar to the methods you can see if you visit an online campus, but it differed in many other ways. I have years of experience in offering “trainings” to development practitioners in many sectors, but how could I collaborate with university professors, applied researchers, and monitoring and evaluation experts to create this new kind of applied training program?

Fortunately, GREAT’s curriculum builds on a long and substantive history of applied research about gender relations in agriculture. Did you know that agricultural development programming was the first and arguably the most prominent topic for attention to gender issues in development from the 1960s to late 1980s? Agricultural research institutions and the work of biophysical scientists led to huge breakthroughs in agricultural productivity during this time. Starting in the 1970s, the entry of social scientists into development institutions, including international agricultural research institutions such as CGIAR centers (e.g., the International Institute of Tropical Agriculture) expanded the perspective of the biophysical scientists research, and strengthened knowledge about the importance of the social dynamics of smallholder farming systems and of small farmers, recognizing women as farmers in their own right, not simply “helpers” to the men in the household.

But while the case for addressing gender disparities continued to grow, agricultural research practices were slow to change. For many years, good examples of successful collaboration between crop-oriented agricultural researchers and gender researchers were relatively few-e.g., engaging women in participatory crop breeding. There were some critical obstacles to uptake of gender recommendations, including that

How might GREAT address some of these constraints? Project directors Hale Ann Tufan and Margaret Mangheni and the other members of the training team at Makerere and Cornell joined me on this ambitious course. Our process was a bit chaotic at times, but looking back there were some guiding principles.

First, it was important to meet scientists with science. GREAT trainers were encouraged to build on the evidence created by solid research on gender issues in agriculture. We made good use of rigorous new research, e.g., on grasping the extent of gender disparities in access to, control over, and ownership of assets, on measurement of women’s economic empowerment (such as the Women’s Empowerment in Agriculture Index), and on understanding the gender dynamics in agricultural value chains. We wanted these materials to be clear and accessible to both biophysical and social scientists.

Second, we agreed that it was also important to not only to build awareness of gender issues but also to help scientists understand why and how they were important. We wanted participants not to simply memorize a few definitions but to be able to see how both the scientific and the social worlds they live in are shaped by gender relations. Gender is neither natural nor something “out there,” but a part of the questions we choose to research and the people from whom we find answers.

Third, we wanted the scientists to be able to articulate the gender equality outcomes of their research. For example, a cassava breeder might be working to develop a variety that “swells,” a desirable characteristic to women farmers. Being attentive to gender equality outcomes, the researcher would take into consideration which varieties could also reduce women’s labor (e.g., by being higher yielding or easier to harvest) or might be more attractive in the market and lead to increased incomes.

Fourth, the program is based on presenting both qualitative and quantitative methods as integral to a gender-responsive research project. The curriculum offers introductory sessions on using both approaches. Participants practice exercises using survey data and ones that use key informant interviews and to try out different analysis skills. The intent is not to turn them into experts, but to become familiar enough with the practices to appreciate what the people they work with can do.

Fifth, and finally, we wanted the course to create a community of practice â€“ and that meant time for networking, conversation, and cultural exploration. We learned the hard way that all work and no play made everyone grumpy!

Looking forward, I’m confident that each cohort passing through the GREAT course will be armed with clear and convincing evidence of the value of gender-responsive research, will have had a good time meeting with other researchers, will appreciate the value of mixed methods, and is helping to grow a cadre of committed professionals. There is a Swahili saying “Pole, pole, ndiyo mwendo” or “Slowly, slowly is the way.” I know that GREAT is on its way one cohort at a time towards creating a new approach to agricultural research, and I’m delighted to have had a part in getting it started.

For further reading on the history of gender issues in agricultural development see: Rhoades 1984, Jiggins 1986, Feldstein and Poats 1989, and Warren and Bourque 1991. For more recent coverage on women’s roles in agriculture see the IFAD, FAO, and the World Bank’s Women in Agriculture Sourcebook (2009) and the FAO’s State of Food and Agriculture 2010-11, Women in Agriculture (2011) and Quisumbing, Meinzen-Dick, Raney, Croppenstadt, Behrman, and Peterman (eds) (2014). To understand gender issues in agricultural value chains, see Rubin, Manfre, and Nichols Barrett 2009 and KIT, AgriPro Focus, and IIRR 2012.